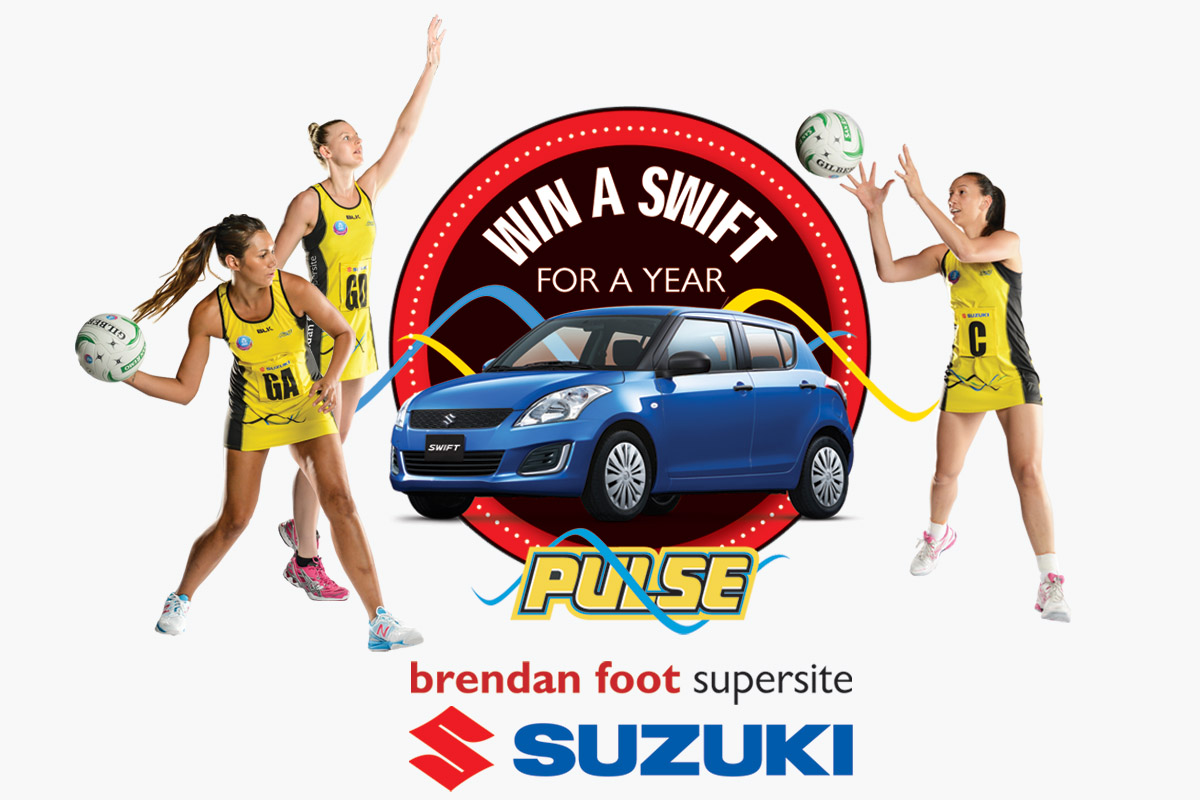 This competition is now closed. The winner has been announced.

This Competition is only open to “Eligible Entrants”, being individuals who: (i) are residents of New Zealand; and (ii) are aged 18 years or over; and (iii) have a Full drivers licence: and (iv) are not employees of the Promoters or any of its related corporations or any of their agencies associated with the promotion; and (v) are not a spouse, defacto spouse, parent, child or sibling (whether natural or by adoption) of such an employee, and anyone else professionally connected with this Competition.

The Prize is the loan of a Suzuki Swift, previously driven by a Central Pulse player, from 22 August 2016 to 21 August 2017 (NZDT), including a current registration, warrant of fitness and a full tank of fuel. The Suzuki Swift to be loaned will be selected by Brendan Foot Supersite at the end of the Competition Period. The winner will be required to sign a Loan Vehicle Agreement, which outlines conditions covering vehicle driver responsibilities, damage, insurance, fines and regular maintenance. The Suzuki Swift will be required to be returned to Brendan Foot Supersite on or before 21 August 2017 with a maximum of 20,000 kilometres on the odometer. Brendan Foot Supersite will have the right to inspect the vehicle at their request during the loan period.

After the Competition Period, a random prize draw for the Suzuki Swift will take place at Brendan Foot Supersite, Railway Ave, Lower Hutt on Wednesday 6 July 2016 (NZDT). The winner of the Suzuki Swift will be advised as soon as possible after the draw. The Promoters will have the right to use any media involved in announcing the winner e.g. photos, video etc, on their websites and social media channels.

The Prize is not transferable or exchangeable and cannot be redeemed for cash. Where the prize is unavailable for any reason,

If the winning Entry is deemed not to comply with these conditions of entry, the Entry will be discarded.

The Promoters may, in its sole discretion, disqualify all entries from, and prohibit further participation in the Promotion by, any person who tampers with or benefits from any tampering with the entry process or with the operation of the Promotion, acts in violation of these conditions of entry, or engages in any unlawful, reckless, dangerous or other improper misconduct that jeopardises the fair, safe and proper conduct of the Competition.

In the event of the Prize not being accepted or claimed within 5 days of the draw, the Winner’s entry will be deemed invalid and the Promoters reserve the right to conduct such further draws at the same location as the original draw as are necessary to distribute the Prize. Any winner in this draw will be notified by phone by the Promoters.

The Promoters decision in relation to any aspect of the Competition is final and binding on every Entrant who enters and no correspondence will be entered into.

The Promoters take no responsibility for non-receipt of any entry for any reason. In the case of the intervention of any outside agent or event which prevents the Promotion taking place or being completed (including but not limited to technical difficulties), the Promoters may in its absolute discretion cancel the Competition and/or reschedule it for another period. The Promoters have no control over the internet, networks or lines including any computer viruses or bugs and server problems, and accepts no responsibility for problems associated with them whatsoever.

The Promoters shall not be liable for any loss or damage whatsoever which is suffered (including but not limited to indirect or consequential loss) or for any personal injury suffered or sustained as a consequence of participation in the Competition or as a consequence of the use and enjoyment of any Prize.

Except for any liability that cannot be excluded by law, the Promoters (including its officers, directors, shareholders, employees, advisors, assignees, agents, licensees, representatives, advertising and promotional agencies) exclude all liability (including negligence), for any personal injury or any loss or damage (including loss of opportunity), whether direct, indirect, special or consequential, arising in any way out of the Promotion, including, but not limited to, where attributable to any of the following: (a) any technical difficulties or equipment malfunction (whether or not under the Promoters control); (b) any theft, unauthorised access or third party interference; (c) any entry or prize claim that is late, lost, altered, damaged or misdirected (whether or not after their receipt by the Promoters) due to any reason beyond the reasonable control of the Promoters; (d) any variation in prize value to that stated in these Terms and Conditions of Entry; (e) any tax liability incurred by a claimant or entrant; or (f) use of a Prize.